Meaning and Design of a Raven Tattoo 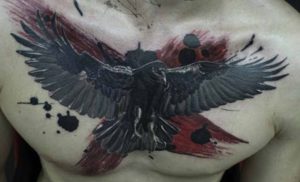 Raven Tattoos are becoming more and more popular every day. Ravens are beautiful birds that also carry a whole host of different definite meanings – making them an attractive choice of tattoo subject for a wide variety of people, but what exactly does raven symbolize?

Ravens are commonly associated with several ideas, including:

As you can see, the raven has developed associations with a variety of ideas or characteristics that you may want to display in the form of a tattoo. 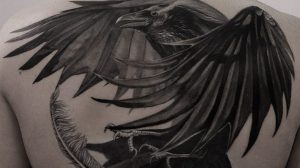 Raven tattoos usually designed in several ways, each of which brings attention to different meanings and inspirations, as well as highlights numerous elements of beauty within the bird itself.
Some people choose to display the raven on its own, in multiple positions as to accentuate the raw meaning and beauty found in the creature, without attaching any extra motives.

Raven leaves the designation of the tattoo open to interpretation, and it can be changed with time, meaning that it can provide a more holistic representation of who the wearer is and what they believe in at any given point.

When tattooing a raven, it is becoming increasingly popular to depict the bird with its wings spread, as if it were soaring through the sky. That allows the wearer to display every inch of its beauty fully and to create an effortlessly stunning design. This design also used to represent the relaxed and ‘high-flying’ nature of the wearer, similarly to how the raven flies high above the world. 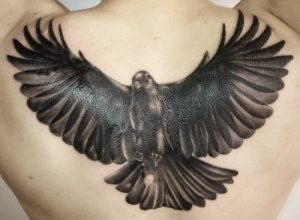 Another popular choice for a raven tattoo is to depict the bird with one or more items or objects, which can help bring attention to specific elements of the design or to outline a particular intended meaning of the tattoo.

Many raven tattoos pictures incorporate blood, or a raven with a skull, or timepiece. When displayed alongside a raven, these objects can highlight the representation of death behind the tattoo design. Furthermore, if the tattoo used to represent the death of a loved one, the person’s name and the date they died may also be found in the tattoo.

Some wearers prefer to take a more historical meaning for their tattoo design. They may display the raven in a Celtic or tribal style, with patterning either around or on the bird. Tattoos in this style usually represent war, magic, or misery, all connotations that are more historical in their founding.

Poets and poem lovers may choose to take inspiration from the classic Edgar Allan Poe horror poem “The Raven” and include the face of the poet, or the word “Nevermore” in some part of the tattoo design.

Finally, some wearers may prefer to highlight the wisdom and prescience of a raven by depicting it with objects such as an open eyeball, crystal balls, or a full moon.

In their way, each of these designs offers a different sense of beauty and a more profound meaning for the raven tattoo and are all fantastic options.

History of a Raven Tattoo 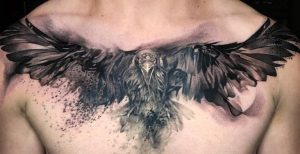 The raven symbolism, raven tattoo, and the bird itself, all have rich and varied histories that make getting a tattoo of this nature for yourself even more appealing, exciting, and meaningful. Below are some of the essential parts of the history of the raven symbol: 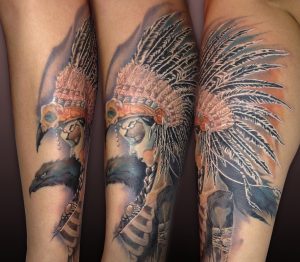 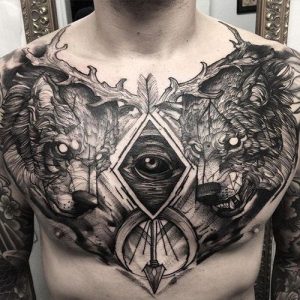 Ravens rarely choose to move in flocks and instead prefer to live with a mate. On the other hand, wolves tend to stick together and work as a pack. Despite this apparent difference, the two animals are still able to form a friendly relationship.

Many old stories of the Tlingit and Inuit, two Native American groups in the Pacific Northwest and Alaska, told about wily ravens who played tricks on both wolves and humans.

As you can see, raven symbolism (and a raven tattoo) have a fantastic history behind them, which helps to give a whole new level of weight and significance behind the tattoo design. 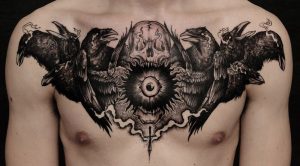 In Greek mythology, ravens are associated with the God of prophecy, Apollo – reinforcing their association with foresight and knowledge. Raven is also known to be a symbol of bad luck in this era, being the animal used by the gods to send messages to the mortal world.

According to the Greek mythological story, Apollo sent a white raven to spy on his lover, Coronis. The raven returned with news that his lover had been unfaithful to him. In a rage, Apollo scorched the raven, turning its feathers black – this is why all ravens are black today.

Now it is increasingly common to see people with a black raven tattoo and also a white raven tattoo. 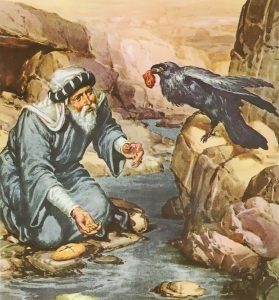 The raven was the first bird mentioned in the Hebrew Bible, with other birds mentioned on numerous occasions throughout other verses of the book.

In the Old Testament, in the book of Genesis, Noah releases ravens after the great flood to test whether the water has receded. According to the Law of Moses, eating ravens is forbidden – a fact that tinted the perception of the bird.

Germanic Cultures and the Viking Age

To Germanic Cultures, Odin was most often associated with ravens. In Norse mythology, Odin is depicted as having two ravens on his shoulders, Huginn and Muninn, which served as his eyes and ears, flying around and bringing knowledge to his ears.

Raven was commonly used in various forms of art in Germanic cultures, most often on banners. Ragnar Lothbrok had a standard depicting a raven called Reagan. If this banner fluttered, Lothbrok would carry the day, but if it hung lifeless, the battle would be lost. 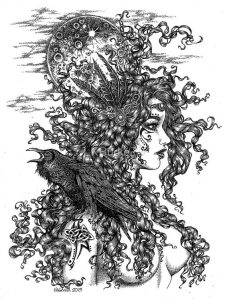 In Irish mythology, ravens are commonly associated with warfare and battleground, as seen in the figures of Badb and Morrígan. The Goddess Morrígan appeared on the hero Cú Chulainn’s shoulder in the form of a Raven after his death.

The bird was also associated with the Welsh God, Bran the Blessed, whose name translates to Raven. Bran’s head was buried in the White Hall of London as a talisman against invasion – bringing stronger association of ravens as a light-bringer. 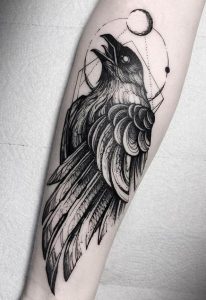 In the Qur’an’s version of the story of Cain and Abel, raven shows Cain how to bury his brother. Raven played the role of a messenger from god.

The story states that after Cain murdered Abel, he didn’t know how to dispose of his brother’s body. While looking for a solution, Cain noticed two ravens, one dead and the other alive.

The living raven began digging the ground with its beak until a hole appeared, in which it buried his dead companion. After seeing the raven do this, Cain decided on a solution and copied the actions of the bird. 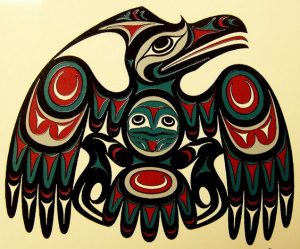 The raven also has a prominent role in the mythologies of the Indigenous peoples of the Pacific Northwest Coast, including the Tsimishians, Haidas, Heiltsuks, and many more. These cultures considered the raven to be the creator of the world, but also a trickster god.

For example, in Tlingit culture, there are two different raven characters, although they are not always clearly differentiated.
One is the creator-raven, who brought the world into being and who is a bringer of light into the darkness. The other is always selfish, sly, conniving, and hungry – the trickster god.

Raven and a Crow Tattoo Differences 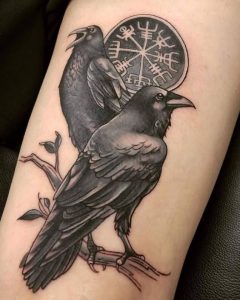 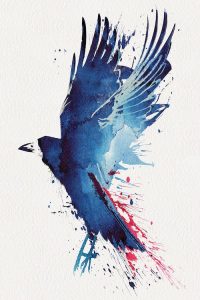 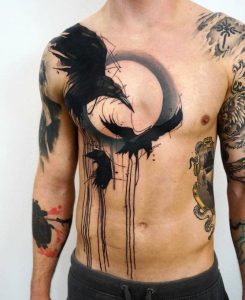 Many body parts are an excellent choice for your raven tattoo. Each can help you to emphasize some aspects of the bird design, or even to bring attention to specific undertones of the raven.

Some areas of the body are better suited for creating more intricate and detailed tattoo designs, which may be necessary when creating a tattoo of any bird, especially one as complex and beautiful as the raven. The best spots to be considered are:

Then again, for some wearers of the tattoo, having a straightforward raven design may be enough, in which case you could place the tattoo in a smaller, more intimate area of the body. In truth, having raven tattoos is a fantastic idea on almost any spot, but some (all from the list above) will allow you to emphasize the stunning tattoo designs you have in mind to their fullest! 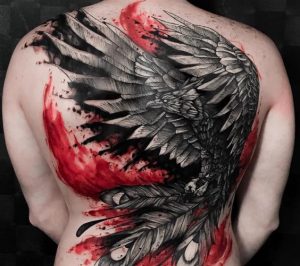 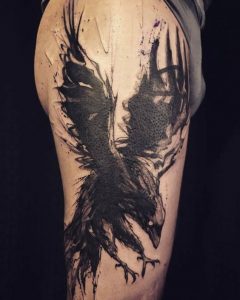 The upper arm is a standard body part to display a tattoo on, historically for many religiously based tattoos, and the raven tattoo as well.

Because having a tattoo on the upper arm allows you to wrap the branch or Celtic pattern, for example, around the arm, you can have plenty of space to display the bird itself accurately. 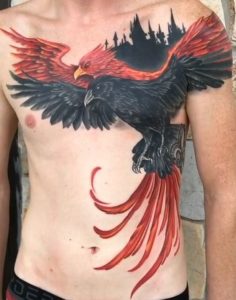 Finally, the chest is another of the most popular places to display raven tattoo images because of its extensive work area, and because the black coloring of the raven looks aesthetically pleasing on this area. Raven tattoos placed above the heart symbolize protection and the bringing of light from and into the heart.

If you are interested in getting a raven tattoo for yourself, the best place to start is by searching for raven tattoos images and ideas via Google Search or Pinterest. When you find a raven tattoo picture you like, get a good idea of what meaning you want to convey with your tattoo, and how you can best display that.

Remember, your tattoo will symbolize only what you want it to mean and not what is written in the articles all over the Internet, so think and choose carefully.

And to wrap it all up, here are the ten most interesting facts about ravens and crows. Have fun!